It is worth telling about this region of Kyrgyzstan separately because many epic traditions of the Kyrgyz people mention the Talas region as the birthplace of the legendary hero Manas, who managed to unite the people of this state and defend the right to independence. Talas oblast is the northwestern part of Kyrgyzstan. Its territory includes open spaces of the Talas valley and the share of Kyrgyz Ala-Too.

This region borders on neighbouring Kazakhstan with two sides. Between the two states, excellent transport links are established. The population of the region is relatively small: a little more than 230 thousand people live on its entire territory.

The people living here are true patriots of their small homeland. They are proud to be lucky to be born and live in the “land of Manas”. Local residents gladly share their knowledge of the epic and readily conduct improvised excursions to places related to the legendary hero. The sacred place among the Kyrgyz people is considered Gumbez Manasa.

Tourists who are interested in the culture of local peoples, can not ignore this magnificent Mausoleum, which is a true monument of ancient architecture.

For those who want to not only relax, but also to replenish their treasury of knowledge, Talas Region is an ideal option for travelling. 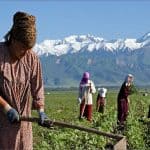 The heart of Kyrgyzstan (Cultural tour)

Up to the celestial mountains

The Wonders of Kyrgyzstan

We use cookies on our website to give you the most relevant experience by remembering your preferences and repeat visits. By clicking “Accept All”, you consent to the use of ALL the cookies. However, you may visit "Cookie Settings" to provide a controlled consent.
Cookie SettingsAccept All
Manage consent

This website uses cookies to improve your experience while you navigate through the website. Out of these, the cookies that are categorized as necessary are stored on your browser as they are essential for the working of basic functionalities of the website. We also use third-party cookies that help us analyze and understand how you use this website. These cookies will be stored in your browser only with your consent. You also have the option to opt-out of these cookies. But opting out of some of these cookies may affect your browsing experience.
Necessary Always Enabled
Necessary cookies are absolutely essential for the website to function properly. These cookies ensure basic functionalities and security features of the website, anonymously.
Functional
Functional cookies help to perform certain functionalities like sharing the content of the website on social media platforms, collect feedbacks, and other third-party features.
Performance
Performance cookies are used to understand and analyze the key performance indexes of the website which helps in delivering a better user experience for the visitors.
Analytics
Analytical cookies are used to understand how visitors interact with the website. These cookies help provide information on metrics the number of visitors, bounce rate, traffic source, etc.
Advertisement
Advertisement cookies are used to provide visitors with relevant ads and marketing campaigns. These cookies track visitors across websites and collect information to provide customized ads.
Others
Other uncategorized cookies are those that are being analyzed and have not been classified into a category as yet.
SAVE & ACCEPT
error: Copyright - Travel Land