Attractions of the southern shore of Issyk Kul

Lake Issyk-Kul, the pearl of Kyrgyzstan, is one of the most visited places both among the local population and among tourists. Crystal clear waters, sandy beaches, cultural sites, a wide variety of entertainment – everyone will find something to their taste and color. In this blog we will tell you about the southern shore of Issyk-Kul, which will certainly be of interest to you while traveling in Kyrgyzstan.

The northern shore of Issyk-Kul is distinguished and famous for its good infrastructure: comfortable hotels, boarding houses, health resorts and sandy beaches. The South Shore is characterized by wild, untouched nature, incredible landscapes, silence, the absence of large hotels and the presence of good guest houses. If, when planning a trip to Kyrgyzstan, you are looking for virgin nature and authenticity, then the southern coast of Issyk-Kul will not leave you indifferent.

Let’s walk through the main attractions that the south coast will delight you with:

Jety-Oguz gorge, meaning “Rocks of seven bulls”, is one of the main beauties not only of Issyk-Kul, but of the whole country. It got its name because of the seven red rocks overgrown with conifers, which are the main attraction of the gorge.

Tourists during their holidays in Kyrgyzstan especially like to be photographed against the background of the Broken Heart rock at the entrance to the gorge, which delights with its view. Jety-Oguz is famous for its hot springs, incredible flora and fauna, waterfalls, jailoo, yurt camps.

One of the most picturesque gorges on the southern shore of Issyk-Kul is the Barskoon gorge. This place is popular with a cascade of waterfalls, spruce forests, and rich flora. And for those who make a cultural tour in Kyrgyzstan, the gorge has something to offer. For example, a monument to cosmonaut Yuri Gagarin, who was in this place.

During your tour in Kyrgyzstan, one of the interesting places to visit will be the Skazka Canyon, which has amazingly shaped red sandy rocks.

When visiting Kyrgyzstan, tourists love this place for its quaint landscape and easy accessibility. Over the millennia, the canyon has taken on unusual forms, reminiscent of a variety of animals and ancient castles. Hence the name “Fairy Tale”, because once in this mysterious place, you really feel the magic.

Tuz-Kol is the saltiest lake in Kyrgyzstan, known for its medicinal properties. The Dead Lake, as it is also popularly called, is comparable in composition to the Dead Sea in Israel. It is impossible to drown in the lake due to the high density of the water. The local residents use the silt mud of the lake to treat many diseases, including skin diseases.

Bokonbaevo village is famous for its ecotourism and berkutchi or eagle hunters. Every year the Festival of Birds of Prey is held here, in which hunters with golden eagles and falcons demonstrate their hunting dexterity and train birds on wild animals. This is an ancient Kyrgyz tradition passed down from generation to generation.

During your trip around Kyrgyzstan, you can book an eagle hunting show, during which the berkutchi will organize a hunt for you. 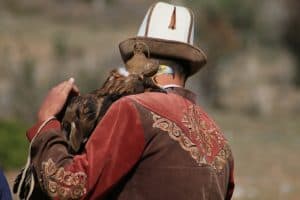 Kyzyl Tuu – the birthplace of yurts

Kyzyl-Tuu village is famous as the birthplace of yurts. This village is inhabited by craftsmen who make yurts, the traditional dwelling of the Kyrgyz. These yurts are sold not only in Kyrgyzstan, but also far beyond its borders.

In order to learn more about the national house of the Kyrgyz – the yurt, you can visit Kyzyl-Tuu during a cultural tour in Kyrgyzstan and watch the process of making and collecting a yurt and even install it.